What is Energy Deregulation? 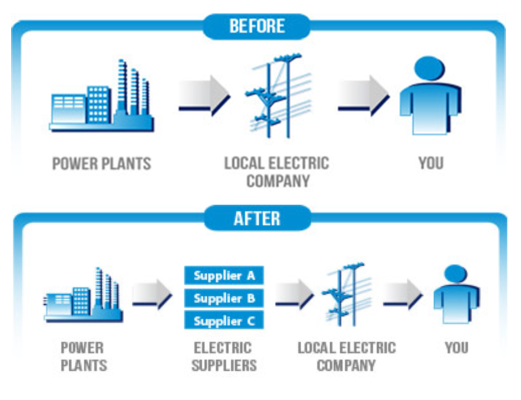 What is Energy Deregulation?

For years, power companies have monopolized the energy market. More than 20 states have tried to end that monopoly by deregulating the market, letting suppliers compete with the giants. By understanding energy deregulation, you can keep more in your wallet and do your part for the planet.

Energy deregulation is all about freedom of choice. If you’re in a deregulated state, suppliers are driven to offer you competitive rates, promotions and rewards. Want to do more for the planet? You can pick suppliers that offer renewable energy plans.

Before deregulation, state utility companies controlled everything from the power plants to the transmission lines to the bill.

The Great Northeast Blackout of 1965 left 30 million people without power in the U.S. and Canada. In response, the North American Electric Reliability Council was created. The U.S. was split into 10 regions, dominated by state-run utilities. Though it improved reliability, it also eliminated competition and allowed the utility companies to hike up their prices.

Things got worse during the 1973 energy crisis, when a petroleum shortage caused rates to skyrocket. In response, the Public Utilities Regulatory Policies Act (PURPA) was passed in 1978 to try to bring in independent suppliers and renewable options. But the state utilities largely managed to maintain control and keep rates high.

In 1992, things finally started to change. Congress passed the Energy Policy Act which restructured the U.S. energy market, making it possible for states to open up competition for independent energy suppliers.

So how does deregulation work?

To have a better idea of how this all works, it’s important to know the difference between energy suppliers and utilities.

On the plus side, if you change suppliers, your utility and its service stays the same. So there’s no need to stress about the switch.

Having so many suppliers to choose from in a deregulated market can get overwhelming. With RateCompare.It, a one-step search will show you how different electric and natural gas rates compare. Finding an energy plan that works for you shouldn’t be complicated and, with RateCompare.it, it doesn’t have to be.

Natural Gas: *Projected Monthly/Annual Savings based on estimated Yearly Usage of 400 Therms per US Household. source: US Energy Information Administration.

Electricity: *Projected Monthly/Annual Savings based on estimated Yearly Usage of 877 KwH per US Household. source: US Energy Information Administration.